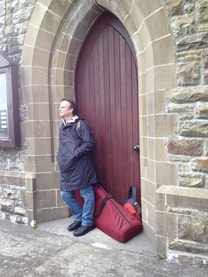 Chad has performed professionally for over 20 years in venues such as the Festival of Nations, the Twin Cities Early Music Festival, The Minnesota State House of Representatives, the Winnipeg Folk Festival and numerous others throughout the US, Canada and Ireland.

Youthful interest in classical and traditional music led him to take up the wire strung harp in 1985, having his first lesson with renowned harper and storyteller, Patrick Ball. Having no harp to continue with, he built his first wire strung harp in his parent’s basement workshop at the age of 16. He attended the Brookfield Central High School, where his first orchestral compositions debuted with the school's orchestra and played harpsichord.

​Self-taught on the harp for years, eventually he sought out Ann Heymann, who continues to lead the revival of the historical Gaelic harp. He was awarded a Folk Arts Apprenticeship grant to study with Ann in 2003, and she became his most influential teacher, as well as a mentor.

The formation of the group "Stella Polaris" presenting Medieval and Early Renaissance music with university classmates, lead to his involvement in the Minnesota Revels and other local early music groups to the present, performing on Gaelic and bray harps, recorders, and early flutes.

In 2009 Chad won the prestigious National Scottish Harp Championship, sponsored by the Scottish Harp Society of America. He is only the second wire-strung harper to win the title in the history of the competition.

Starting in 2007 Chad was invited to be the harp instructor for the Center for Irish Music in Saint Paul, Minnesota. He served as the school’s 2nd Artistic Director from 2009 to 2011 and continues to teach wire and nylon strung harp,s flute, whistle and hammer dulcimer.

In 2010, Chad was the recipient of a highly competitive Artist Initiative Grant from the Minnesota State Arts Board.  In 2011, the American Composers Forum invited Chad to take part in the launch of their new Composer Teaching Artist training program. In 2012 he was nominated for “Top Irish Harpist” in the Irish Music Awards.

A veteran of the concert stage and recording studio, he collaborated with projects ranging from ancient and traditional world music to progressive rock and contemporary classical music ensembles.

Chad has recorded three solo albums on Gaelic harp: “Of Bards and Beggars”, traditional music and original compositions released in 2011 to broad critical acclaim, “Chasing the Winter Sun”- music for the Christmas season and Ó Cearbhalláin~Rí na nDall/ O'Carolan~ King of the Blind ~ The Songs and Music of Turlough O’Carolan, last fall.