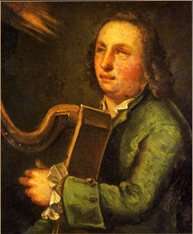 Portrait of Turlough O'Carolan used by kind permission of the National Gallery of Ireland.
As we lacked the room for all this information on a CD booklet, I've included it here!
This page is a work in progress, so check back as I add sections. If you are interested in a copy please email me from the contact page.  Thank you, CM.

Why another O’Carolan album? Why this project?
In modern times, Turlough O’Carolan (1670-1738) is justly celebrated as Ireland’s national composer.
He had a life of overwhelming obstacles: Afflicted with blindness from smallpox in youth. Brutal war plunged his nation into chaos. Crushing poverty and oppression that followed. Through all that, O’Carolan not merely survived, but thrived, welcomed as a singer, harper and bon vivant across Ireland, an outstanding musician who created a luminous body of music and song on par with the best composers of his day.

A major revival of his music has been underway for decades, with much of his work in print for many years.
Yet the majority of his output is unfamiliar to followers of Irish traditional music, including players of the Irish harp. O’Carolan’s songs, lovely and full of his bright spirit, are rarely performed.

The reasons for this are easy to understand.

Some of the “standard” printed versions of these tunes are awkward or even unplayable on the Gaelic harp or other traditional instruments and were assembled before the bulk of the research and subsequent modern revival of the Gaelic harp occurred.

​The situation with the songs is worse, with the majority of the Irish lyric texts inaccessible until the last handful of years. Adding to the list of complications,  the versions of tunes and lyrics we know today, were often collected from different sources at different periods.

To further complicate things, O’Carolan had a habit of writing multiple songs and harp compositions for his important patrons using similar titles. Some of these individual song and compositions have occasionally been confused or conflated with each other over the centuries of transcriptions. Careful study and some artistic judgement is required to get bring them together.

Moreover, there have been scant few attempts at recreating this vibrant music as the composer himself would have likely performed and heard it during his life, rather than through the filter of intervening centuries.

One must remember that O'Carolan was first and foremost the product of Irish Gaelic culture, whose musical style were a world apart from that of the courts and opera halls of Europe. The Gaelic harpers of O'Carolan's time were not educated in the formal rules of European art music- counterpoint, voice leading, or harmony, nor did they adhere to these rules in their works. They were trained aurally, master to student, in a native musical tradition that had flourished since the middle ages. (See my page on the history of the Gaelic harp, for more relating to that tradition.)

While this music was composed during the Baroque era, it is stylistically and culturally of a different genre that co-existed during the same time. In content and performance, this early Irish music is as different from mainstream Baroque as the Latin masses of Monteverdi are from the Psalm settings of early Scottish composers.

The events during the years prior to O'Carolan's life, brought enormous and devastating changes to Ireland, her polity and culture.  Culture is tenacious however and the old native music was not replaced outright. Turlough and his contemporaries were certainly influenced and intrigued by these new exotic Baroque forms they encountered in the households of their patrons, even imitating some of the features of those forms. The result was the fusion of styles that we see in O'Carolan's music: Baroque music through a wholly Irish cultural filter.

In this album we aim to bring to life the beauty, vigor and variety of character in a manner that an audience of the composer’s time would have heard listening to this music.  As well, we are thrilled to bring forward a number of gorgeous songs composed by O’Carolan that, to my knowledge, have not been recorded previously.

Notes on tracks:
1. ) King of the Blind/ Cian O'Hara/ Mary O'Neill (Carolan’s Favourite Jig)
“King of the Blind” is one of the most recently identified O’Carolan tunes. It appears in the 1724 Neal collection, but wasn’t firmly attributed to the composer.
​
I am greatly indebted to fellow early Gaelic harper and researcher, Simon Chadwick, for his scholarship. Simon discovered a second version of the tune in the Pádraig Ó Néill manuscript (MS44.806/1 , National Library of Ireland, circa 1780-1800) and inscribed “Carelon or King of the Blind”, confirming Carolan as the author.  My setting is a composite of these two, with added touches of the best Baroque Irish harp style I could muster.

Scion of an old family, Cian O’Hara was Sheriff of County Sligo in O'Carolan's days.. This tune has lyrics, similar in tone to own harper's convivial sort but from the style of the writing, these maybe not be by O'Carolan,  This tune is labeled as "Keane O'Hara, third air" in O'Sullivan's book. We play it as an air, the harp is joined by Cory's flute.

The extant Irish lyrics to “Mary O’Neill or O’Carolan’s Favourite Jig” would put the most elaborate tongue twister set in English to shame! Rather than torture our vocalist, we played this as a dashing up tempo dance tune.

2. Catherine Martin
The subject of this gorgeous praise song was probably the daughter of a Roscommon farmer, one Thomas Martin. Carolan praises not only Catherine’s beauty, but her character and generosity.

3. Tom Judge/ Abigail Judge/ Jigg to Madam Judge
Thomas Judge was the High Sheriff of Leitrim and of Westmeath, intermittently from 1711-21. Abigail Smyth and Thomas married in 1707 and these pieces flow together nicely as a set.
‘Abigail Judge’ is often rendered as a slow march. Here the piece takes on an upbeat character, played with a hornpipe lilt.
The set concludes with an intricate and rarely heard baroque Jigg, the immediate ancestor of the modern Irish treble jig.

4. Ode to Whiskey/Charles O'Conor
No less of a scholar than Dr. Douglas Ross Hyde, the first president of the Irish Republic, described the “Ode to Whiskey” as “one of the finest Bacchanalian songs in any language”. Dr. Hyde ascribed this song to our harper, and while that attribution has be occasionally questioned, the melodic style is strikingly similar to other O’Carolan tunes, as is the treatment of the topic matter in the lyrics to other songs firmly credited to him.

We paired this with an equally lively jig, dedicated to “Charles O’Conor”, one of Carolan’s closest friends. O’Conor was a harp student of the composer, and gave us a fantastic first hand account of his time with O’Carolan in his diaries and in later interview with Joseph Cooper Walker, an early biographer of the harper.

5. Mrs. MacDermott Roe/ Miss McDermott (the Princess Royal)
Two branches of the McDermott family that were important patrons of the composer from his early years and indeed supported his entry into harping. These two tunes highlight O’Carolan’s broad range as a composer, the first firmly from the older Irish tradition, but who could also successfully lean into the trendy “modern” baroque music that was fashionable among his younger patrons.

6. Colonel John Irwin/ Colonel Irwin
One of Carolan’s better known melodies, a gem of a song for Colonel John Irwin of Tanrego House, Sligo.
​Carolan describes the young John as generous and mannered, yet courageous in his military exploits in Flanders.
The following piece was likely intended to be a Branle, a dance form that originated in medieval France and by the 16th century was widespread throughout Europe. The Branle was still quite fashionable at this time in dance manuals that circulated amongst the aristocratic Ascendancy, making this an apt choice to entertain a man as dashing and worldly as Irwin.

7. Mild Mabel Kelly/ John Kelly/ Planxty Kelly
The surname Kelly (ó Ceallaigh) is the second most common family name in Ireland, and was in O’Carolan’s time. So, it should come as no surprise that he composed seven tunes dedicated to various members of the Kelly family.
The version of the first piece, "Mild Mabel Kelly" in this set I took straight from its first published version, John and William Neale 1724, Dublin. While it has surviving lyrics, this melody runs a full two octaves, making it no easy item to sing well. Yet, it was far too gorgeous to not include here, in a solo harp version.
​
The second tune, “John Kelly”, has a somewhat vexing history,. The earliest version appears in Lee’s 1780 collection. In 1792 Bunting collected it from the great harper Arthur O’Neill, but his version in his field notebooks, clearly written down in haste, and fairly difficult to make out. That setting also differs considerably from his two later published versions. Adding to the confusion, Bunting had the wrong title “Miss Burke”. Luckily the tune appeared in other sources to fill in the “holes” of Buntings field book, between them all attempted this reconstruction of Art O’Neill’s version, which feels much more in line with O’Carolan’s buoyant 6/8 tunes, than Bunting’s later piano arrangements.

I end this set with the seldom heard “Planxty Kelly”. We have no idea of who the intended subject of this tune was, and this is the title given in the Pigot Mss, sole source of this piece. Eliminating the odd chromatic notes found in the original source, (all unplayable on the wire strung clairseach,) a fierce jig melody utterly Irish determination swiftly emerges.

8. Hewlett/ Patrick Kelly
Research has never been able to identify the precise subject of this ode to convivial drinking. Edward Bunting uncharacteristically neglected to mention who he collected this tune from, but did name a certain “Blind Billy O’Malley” as the source of his lyrics, which work well to this tune. Cory best described this as “a song describing an actual party, set to a very Irish minuet.’ O’Carolan mentions the viol in the first line of the second verse.
In the festival spirit of this song, we follow it with an unapologetically Irish dance tune “Patrick Kelly”, taken from Lee’s 1780s collection and arranged for the group in a style akin to the Playford and Oswald collections.

9. Lament for Charles MacCabe
Another close friend of Turlough’s was fellow harper and poet Charles MacCabe (Cathaoir Mac Cába). This powerful “Lament” was the product of a ruthless practical joke in which McCabe fooled his blind friend into think that he, McCabe, had died! With the help of some mates, O’Carolan got his revenge and the friendship survived undiminished. In the meantime, this exquisite tender homage was written.

10. Morgan Magan/ Carolan's Draught
Two well-loved favorites amongst O’Carolan’s work, which make a logical set together. Neither had surviving lyrics, both seem clearly intended as harp pieces. This version of Morgan Magan comes primary from the 1724 Neal Bros. publication, and took some arrangement cues from Bunting’s surprisingly straightforward piano setting from his 1809 volume. In the following piece, O’Carolan’s Draught, we find a spectacularly dramatic, Italianate allegro worth of Handel’s genius. It comes from the Petrie collection, who in turn copied it from an older, unknown manuscript source.
The harp is joined again by fiddle and flute, both instruments mentioned in the title page of Neal.

11. Carolan's Farewell to Music
This beautiful, haunting piece was the very first tune I ever heard on the wire strung harp, from the playing of the master storyteller, harper, writer and all around mensch, Patrick Ball.
The given back story of this tune- O’Carolan began to fall ill and so returned to Alderford in Roscommon to his old friends and patron, Mary MacDermott Roe. After some days confined to bed, “he called for his harp, played this tune, and was then led upstairs to what was to be his death-bed.”
More notes in preparation! Stay tuned! CM
Powered by